What is the ClueNotation puzzle of the day? 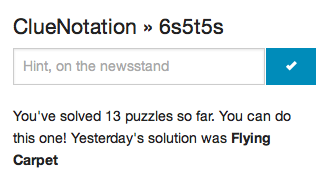 ClueNotation is our daily puzzle that appears on the main page of DailyCues. Each day a person's name, an object, or a common phrase will be written in cue notation. Cue notation is a way of writing out how to cue words where the handshapes are represented by numbers (e.g., 5 for handshape 5) and vowel placements are represented by letters (e.g., c for chin placement). This system was originally intended to give beginners a way to take notes on how to cue.

Cue notation, however, was not intended to be read on its own. Without the benefit of the mouth, the symbols of cue notation can be ambiguous. In early writings on Cued Speech, reading the hand alone was deemed "impossible." In reality, patterns emerge for people who cue English. They see through the ambiguity – filling-in the missing information.

ClueNotation provides a fun, low-pressure way to practice seeing the patterns of English through Cued Speech. The lack of mouthshapes re-introduces ambiguity and this can be a good way for novice cue readers to practice without a partner.

There are more than 1,400 puzzles in 75 categories. A new puzzle appears each day.

Before you put your cursor into the ClueNotation response box, you will see a clue (e.g., Hint, check your math). These clues help narrow the options and allow you to use some top-down information (i.e., context). The hints are explained in more detail below:

When you put your cursor in the box, the hint will disappear. Type your answer and hit the submit button. You will be told if you are correct or not. Capitalization and punctuation is ignored. So if your answer is incorrect, check your spelling. Answers to the daily puzzle are revealed the following day.