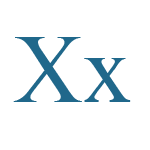 Xx is a somewhat special letter in written English because it does not represent its own unique phoneme. In fact, it often serves to represent more than one phoneme in a word. For this reason, instructors may devote time in an introductory cued English class to covering how words with Xx are cued.

Notice that the addition of either /sssssssss/ or /zzzzzzzzz/ to the preceding consonant follows the same voicing rule that occurs with addition of plural -s. Voiceless /kkkkkkkkk/ takes voiceless /sssssssss/. The voiced consonant /ggggggggg/ takes the voiced consonant /zzzzzzzzz/. So, while a word may be pronounced with either /ks/ or /gz/, it is unlikely to mix those combinations. In other words,  */kz/ or */gs/ are unlikely pronunciations for native English users.

The letter Xx has several other possible pronunciations. At the beginning or words, it may be pronounced as /zzzzzzzzz/. The following table provides a few of the less common pronunciations of this tricky letter.